This is the third article in a series of four.

The first article covered the “Geology of the Latrobe Valley” in which we learnt:

The second article covered the “Impacts from Mining” in which we learnt:

[1] A batter is the sloped section of the pit wall. It can be either an individual batter (slope) between benches or the overall slope of all the individual batters and benches. A bench is a near level surface used for access and the running of services.

In this article we will discuss what is required to create safe, stable and sustainable conditions after mining ceases.

Whether the post rehabilitated mine void is accessible by the public or not, there are minimum standards required by legislation. All areas above the water level (which if it is dry will include the floor of the mine void) must be maintained in a state to minimise the spread of fire. This will require slopes to be accessible for slashing. This is generally recognised as requiring a slope of 3 units horizontal to 1 unit vertical to be safely tractorable.

Where any of the batters contain exposed coal, this will need to be effectively covered to prevent fire from getting established. We have seen and experienced how difficult it can be to extinguish a fire if it gets a hold in an area that does not have an existing highly reticulated fire protection system.

It is important to ensure that our environment is not adversely impacted by toxicity, including but not limited to:

Protection is enforced against these adverse outcomes under CFA, WorkSafe and EPA Regulations. There are likely to be some residual issues from work practices that were deemed acceptable prior to our current state of Regulations. Some of these residual matters could be problematic to manage in perpetuity. They are more likely to reside at the older sites of Yallourn and Hazelwood.

The second article in this series dealt with the impacts of mining most of which involved potential conditions to create instability. So, it shouldn’t be surprising that managing these impacts, by:

The sites of all 3 mine voids are within the catchment of the Latrobe River system. Presently there are structures in place so that each mine catches as little rainfall as is reasonably practical. These structures are in place to divert as much water away from the voids so as to avoid the costs of storing, pumping out excess water and treatment of that water which picks up suspended solids, colour and particles, on its journey to the bottom of the void. Excess water is treated and returned to the river system at EPA licenced discharge points which have discharge parameters that need to be met. There is considerable monitoring to ensure discharges are within the licence parameters.

Effectively, all rainfall into the voids is ultimately discharged to the Latrobe River system less any evaporation losses during its storage and treatment phases.

Any mine owner that proposes to hold any water in their mine void is effectively seeking to divert a portion of the Latrobe River catchment to service their plan. There are reasons why this may be a good solution but there are other pieces of the puzzle that need to be factored into this consideration:

At the Mine Fire Inquiry following the February 2014 Hazelwood Mine Fire the matter of mine void rehabilitation and some of the complexities received a public airing.

In the early days it was strongly advocated that the best technical solution to solving these problems was the flooding of every mine void.

Whilst there is significant technical merit in this suggestion from a stability perspective there are significant sustainability questions to be resolved. We saw in article 2 that the combined volume of void to be filled to the lowest level of the Mine void perimeter would require 2,900 Mm3 or 2,900 Gl of water. To provide some perspective on this volume of water, the Sydney Harbour is estimated to contain approximately 500 Mm3 or 500 Gl of water. Alternatively, according to Melbourne Water’s website, the total volume of Melbourne’s 10 water storages contains 1,812 Gl of water with the Thompson Dam dominating with 1,068 Gl. So, we would need more water than all of Melbourne’s water storages, if they were full!!!!

[1] A horizontal bore is a hole, generally into an individual batter, that slopes gently upwards from the outlet to be free draining.

[2] Toe support is generally dirt placed at the bottom of a batter to increase friction and help stabilise a batter.

[3] Driving loads are excessive weight on which gravity acts to reduce the stability of a batter.

[4] Water ponding is water sitting at the bottom of a batter which may lower friction and make a batter less stable. 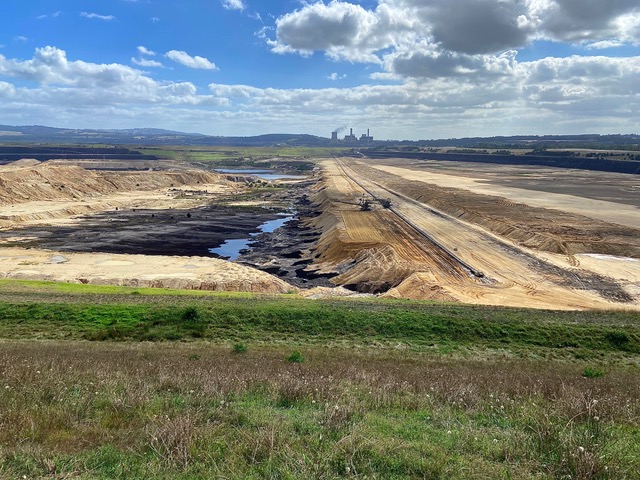 What have we learnt about the creation of safe, stable and sustainable conditions after mining ceases?

This article has been prepared by Richard Polmear, a member of Great Latrobe Park and former Mine Engineering Manager and Director Mining at Hazelwood during his 34 years of employment in the industry.

This is the third article in a series of four.