Great Latrobe Park (GLP) is a small group of interested community members who are keenly concerned that the Latrobe Valley mines are repurposed in an appropriate and beneficial manner.  The group includes people with considerable experience in areas such as mining, engineering, regional planning, health and community services, agriculture and education.

The sole objectives of GLP in providing this series of articles are:

This article “Geology and Physical Properties of the Latrobe Valley Brown Coals” is the first in a series of 4 articles prepared by Great Latrobe Park (GLP) to increase community understanding.

Most of the brown coal in Gippsland lies within the Latrobe Valley Depression, an onshore extension of the large Gippsland Basin. The Depression contains a pile of geologically young sediments up to 1000 metres thick containing a number of massive coal seams that in some places exceed 250 metres in thickness and can be traced for more than 50 kilometres. Although high in moisture, brown coals in the Latrobe Valley have a low ash content.  Interseam sediments, the sands and clay layers that lie between  the coal seams are either minor or absent in the current mines but where present can present problems. Some layers of basalt are found within the coal bearing sequence, but these are restricted to deeper formations close to the western and southern margins of the Latrobe Valley Depression. Underlying the coal measures are mudstones, sandstones and conglomerates of Mesozoic age, the time when dinosaurs roamed.  Because the centre of coal formation shifted gradually from east to west during deposition, the coal seams become progressively older and tend to show an average increase in rank from west to east.

Latrobe Valley brown coals are relatively immature in terms of their ‘rank’ on the scale of coalification and could be described as lignite. They typically comprise a structureless mass of plant debris with recognisable tissue inclusions ranging from microscopic groups of cells to massive tree trunks and branches. Large woody remains are visible in most exposed coal seams and are largely of coniferous origin. Hardwood is represented mainly by minor inclusions of Banksia and Casuarina.

The ash yield of most brown coal in Gippsland is low, falling mostly within the range of 1% to 4% by weight on a dry coal basis. Even so, the presence of certain inorganic constituents, which are soluble salts and other ash forming inclusions introduced into the coal by groundwater. They bond to the organic structure of the coal as molecules and can exert a major influence on the burning properties of the coal, how readily boiler surfaces become fouled and on the nature of stack emissions.   Additional ash forming inclusions in the form of contamination by sand, clay, silt, pyrite and silica may also be present. Latrobe Valley brown coals, being relatively immature in geological terms, are “wet” with an average moisture content ranging from less than 50% to more than 65% depending on seam.  Moisture content is linked primarily to the degree of consolidation through burial that has taken place and normally decreases with depth, both within seams and from one seam to another. This trend is not entirely uniform with local variations in moisture content related to structure, degree of compaction and coal routinely encountered.  Due to their high moisture content, Latrobe Valley brown coals have a low net wet specific energy compared to black coal. Despite this, brown coal has been used to generate electricity by employing techniques and innovations to maximise the heating value that can be extracted. The high moisture content also means the relative weight of brown coal varies between 1.12 and 1.16 times greater than water. Thus, brown coal has very little resistance to a build up of water pressure with sizeable blocks of coal relatively easily moved to allow water pressure to dissipate. Despite this undisturbed brown coal weathers surprisingly well and is not easily eroded.

Coal forming environments and the plant communities that inhabit them were at the time heavily influenced by the depth of water present.  This depended on factors such as climatic cycles, seasonal fluctuations, swamp migration, rate of subsidence, uplift, tilting and changes in drainage.  The Latrobe Valley brown coals accumulated in place and are visibly layered, not so much in their moist state but when the faces are dry. Known as lithotype banding, this layering is related primarily to coal type, which is in turn governed by the original vegetation. Although lithotype banding has relatively little effect on most of the basic coal quality parameters applicable to power generation, it has proven to be a consideration in the suitability of coal for upgrading processes such as liquefaction and is known to have some effect on combustion stability in power station boilers

Regarding the future rehabilitation and “re-purposing” of the existing mine voids, it is important to note that there are a number of important geological considerations. For a start, the physical properties of brown coal lays somewhere between a rock and clay. It is also well jointed because of regional stresses in the ground that have acted to propagate what are essentially groups of massive natural cracks throughout each seam. Added to this, the coal seams often overlie aquifer systems, underground layers of sand and gravel that are filled with warm to hot, pressurised groundwater. This is especially the case at Hazelwood mine, on the edge of which Morwell is poised.

Given the above, it should be clear that the Latrobe Valley coal deposits are unique in the world. Recognising the fact that mining has exploited the coal uncommonly close to towns and infrastructure, it would be prudent to ensure that a very full and comprehensive understanding of the situation is developed before assumptions of what can or should be the preferred options for repurposing are further progressed.

What have we learnt about the geology of the Latrobe Valley:

This article has been prepared by Robert Gaulton, a member of Great Latrobe Park and Regional Geologist with the SECV for 25 years.

This is the first article in a series of four. 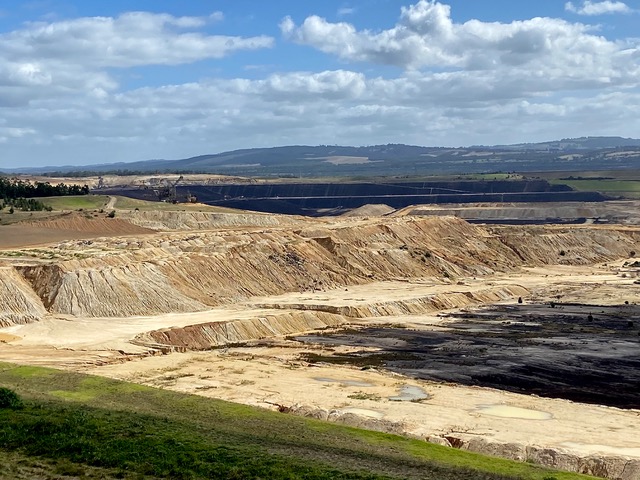