This is the second article in a series of four.

Previously in Article 1 – Geology of the Latrobe Valley we learnt:

In this article, prepared by Richard Polmear, a member of GLP and former Mine Engineering Manager and Director Mining at Hazelwood, we will discuss the impacts from mining Latrobe Valley brown coal.

Firstly, it is entirely appropriate to provide some guidance as to the size of the mine voids that have been created whilst supplying the vast majority of the State of Victoria’s electricity needs over the last 100 years and what they may grow to be based on their current shutdown dates. The following table provides some relativity across the sites:

Note: 1 – Each of the Site owners was asked to provide their latest data but that had not been received by the time of publication.

Because the coal seams are so thick, particularly at Hazelwood and more so Loy Yang, the dirt laying over the coal needs to be placed away from the coal extraction area (mine void) until sufficient floor is exposed to accommodate water storage and then dirt placement.

At Hazelwood the dirt was placed externally until 1997 when internal dumping commenced. From the commencement of mining this amounted to about 100 Mm3 of dirt being placed to the east of the Mine.

At Yallourn the dirt was placed externally to the north of the original workings, adjacent to the Latrobe River. Placing dirt back into the mine void was able to commence much earlier due to the coal seam being considerably thinner. Most of the dirt removed from Yallourn has been placed back within the mine void.

At Loy Yang dirt was initially placed to the south of the mine and west of the Power Station to fill a natural gully. At the time of publishing Loy Yang had not replied to requests for information on the volume of dirt placed externally prior to internal placement of dirt commencing.

1. One of the least obvious but none-the-less important impacts from digging any hole is a loss of lateral support between particles. Imagine that you dig a small hole in the garden to plant a plant. In removing a spade full of dirt, you leave dirt behind at the edges of the hole. The dirt particles nearest the edge no longer have particles next to them on at least 1 side, but they do have particles against them on the opposite side. These exert a force that causes the dirt particles nearest the edge of the hole to move marginally towards the centre of the hole. When you dig deep holes these movements, known as horizontal relaxation, can be impactful, such as:

a. on some conveyor alignments, depending on the location and nature of the digging activity,
b. potential to shear bores[1] that extend through various layers,
c. open, previously “tight” coal joints, allowing water to enter joints and create unstable batters[2],
d. create cracking in dirt also allowing water to enter the surface and potentially intercept coal joints to create unstable batters.

Depending on what materials are used to fill or partially fill mine voids these impacts can be largely reversed, although that can create new operational concerns, such as bore shearing.

2. The dirt overlaying the brown coal mostly comprises “highly dispersive” soils. This is a classification that means the “goodness can be leached out of the soil” resulting in caverns or distinctive erosion. Impacts are very similar to cracking in dirt, in that water can enter the surface and potentially intercept coal joints to create unstable batters.

5. The last item to be covered is the most significant aspect of mine void stability within the Hazelwood and Loy Yang voids. It is the need to maintain a balance between aquifer pressures and the weight of materials overlying those aquifers. At Yallourn where the coal seam is thinner and the aquifers are deeper, there is still sufficient weight of materials overlaying the aquifers that depressurising aquifers is not required. This is not true for Hazelwood and Loy Yang mine voids. Failure to maintain a balance will result in the floor of the mine void heaving with a consequential loss of toe support for the batters resulting in large scale batter collapse. In order to discontinue pumping from the aquifers it is necessary to firstly place sufficient weight on the floor of the mine void to counteract the aquifer pressures. Over time aquifer pressures will increase once pumping ceases.
The impact of aquifer depressurisation has resulted in consolidation of certain materials e.g. interseam clays which has seen significant vertical settlements occur over long periods of time. These are on a regional scale with little to no differential settlements observed over the more than 50 years of monitoring.
When aquifer depressurisation ceases there is likely to be some rebound in these vertical settlements with the extent largely unknown at this point.

[1] A bore is a hole in the ground, usually near vertical, drilled to access a lower level.

[2] A batter is the sloped section of the pit wall. It can be either an individual batter (slope) between benches or the overall slope of all the individual batters and benches. A bench is a near level surface used for access and the running of services. 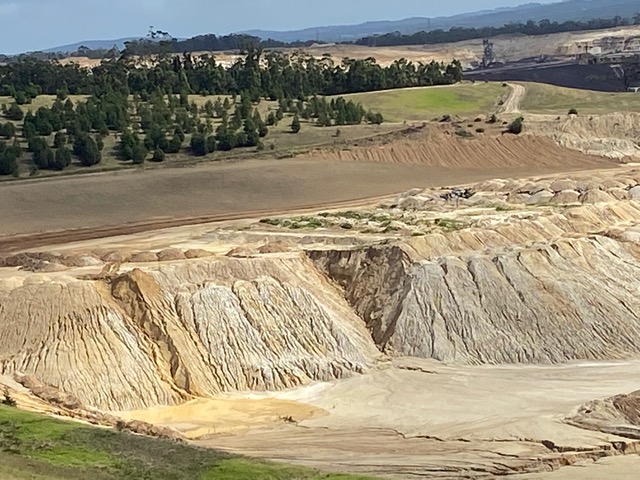 View of mine rehabilitation progress at Yallourn, near Latrobe Rd boundary. Image courtesy of M. Gaulton.

What have we learnt about the impacts from mining?

This article has been prepared by Richard Polmear, a member of Great Latrobe Park and former Mine Engineering Manager and Director Mining at Hazelwood during his 34 years of employment in the industry.

This is the second article in a series of four.