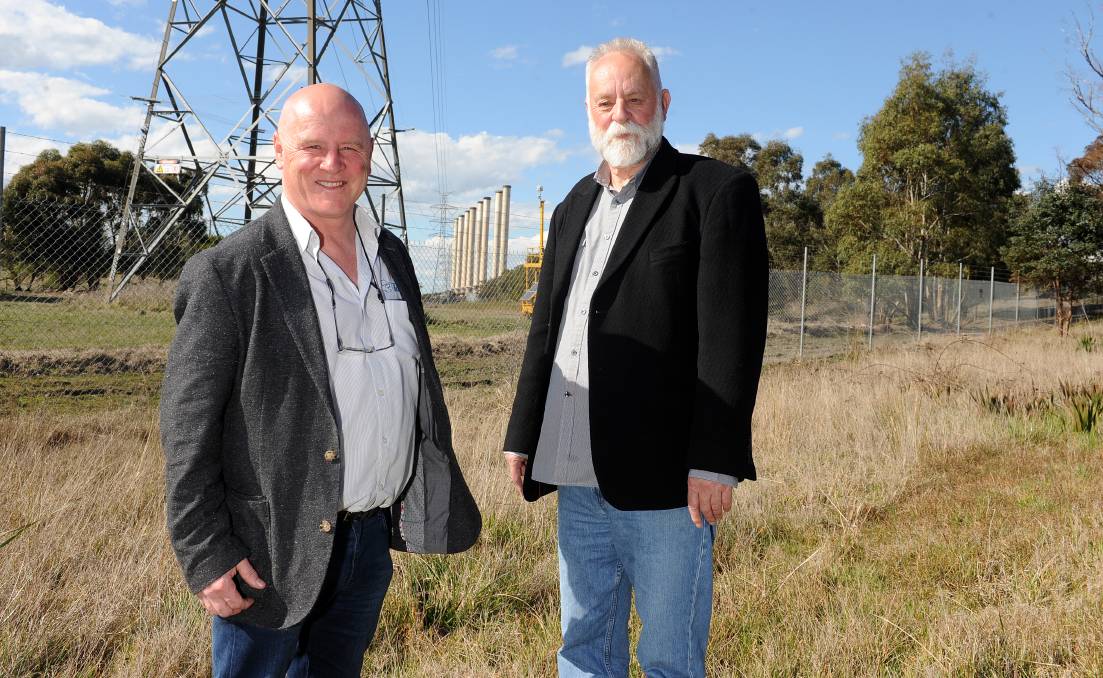 Independent candidate for Morwell Ray Burgess and Latrobe City councillor Graeme Middlemiss are campaigning to save Hazelwood’s iconic stacks, suggesting a moat or shrubbery garden around the structures could be the way to save them. photograph hayley mills

A Latrobe City councillor and an independent political candidate have joined forces in a bid to prevent the demolition of Hazelwood’s eight chimneys.

They have suggested a moat or shrubbery garden to fence off the iconic structure and encourage tourism to the region.

It follows an order by Planning Minister Richard Wynne on Wednesday who said Hazelwood Power Station would not be included on the Victorian Heritage Register, despite a Heritage Council recommendation to have it added to the register.

Latrobe City councillor Graeme Middlemiss and businessman and independent candidate for Morwell Ray Burgess weighed in on the controversial issue last week and called for the eight stacks to be retained as a “badge of the Valley”.

Cr Middlemiss likened the concept to disused wheat silos in western Victoria which could be painted in murals to reflect the different roles within a power station, while Mr Burgess said it would “give some drama” to the iconic landscape.

Both men dismissed concerns about cost, with Mr Middlemiss saying “there would be almost zero maintenance cost and that would last forever”, and on safety stating a perimeter would be set up around the site to prevent falling debris from injuring onlookers.

“We’re not suggesting tourists walk up and touch [the stacks], we had in mind an area of a few hectares around it perhaps planted with low flowering shrubs … so people can’t get hurt by them,” Mr Middlemiss told The Express.

“Off the top of my head I’ve suggested shrubbery, but fenced, so if pieces fell off [the stacks] they won’t fall on [people]. Council has suggested perhaps a viewing area on the existing road … where you can stop and say ‘Look at that’.

“The cost is being exaggerated. I think ENGIE has been concerned all along about suggestions for the future of their site, that it will cost them a lot of money … the way forward is to sit down and negotiate.”

Mr Burgess, who spent 15 years in the power industry including time as a union representative, said the stacks could be retained and used as a tourism drawcard – likening them to Coffs Harbour’s Big Banana.

“A moat is a similar idea to Graeme’s idea of having it fenced off with a flowering undercover – it would perhaps add to the drama of it,” Mr Burgess said.

“It’s part of a change that we could have; it’s not a power station of course when it’s finished, but it’s where we’ve been and a new way for the Valley.

“At the moment we haven’t really got a cost on what it’s going to demolish them … but if we had the money to leverage the edifice or something that gave us the power and the strength – then it’s worth considering.”

The iconic stacks could form part of a ‘motorsport mecca’ – a multipurpose motorsport complex in the Latrobe Valley – which council is considering and could be based on the existing Hazelwood site.

“Council is using consultants for the motorsport complex, they’re supposed to be the best in the world, and the first thing they said when they went and looked at the site was [the chimneys] would draw everyone’s attention to the complex,” Cr Middlemiss said.

“They said ‘You’ve got to keep the eight chimneys, you’ve got to have the complex there’.”